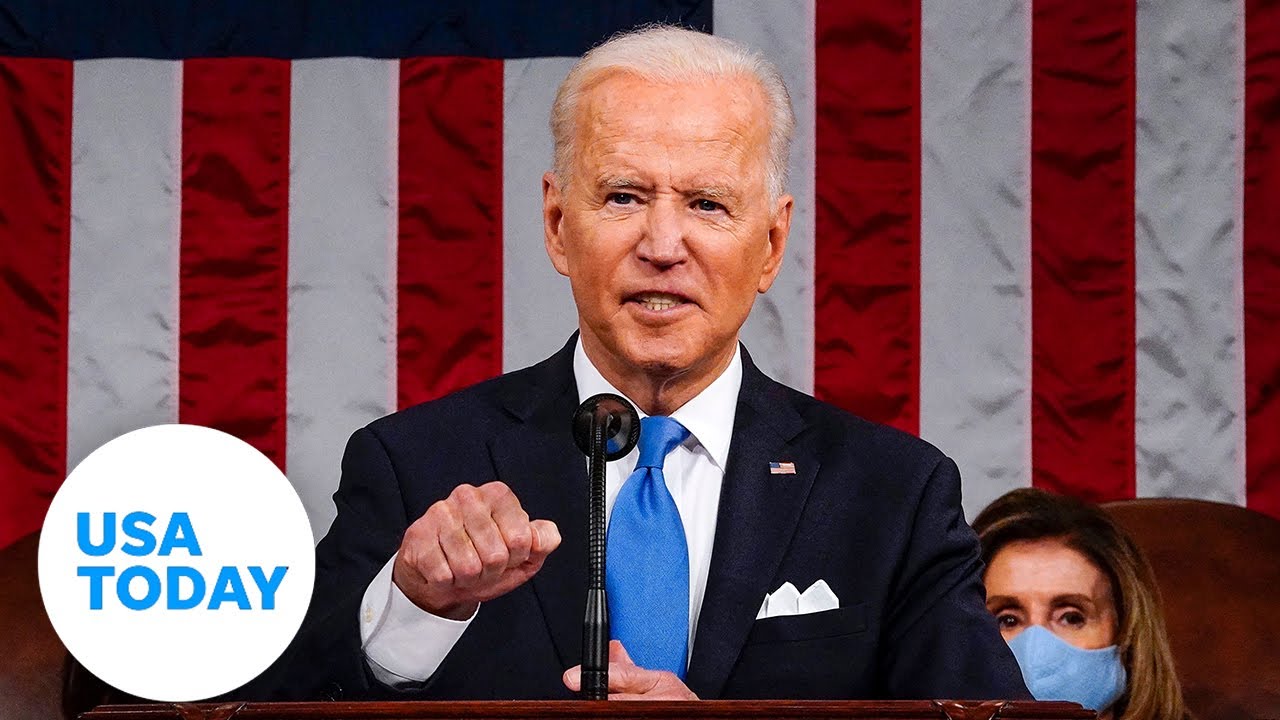 The plan, which would be paid for primarily by a corporate tax increase, would include upgrades in transportation infrastructure such as roads, bridges, highways and airports as well as broadband internet and replacing lead pipes.

It would also seek to expand caregiving for seniors and people with disabilites, among other investments in what the Biden administration has called “human infrastructure.”

“This plan will help these families and create jobs for our caregivers with better wages and better benefits,” he said. “For too long, we have failed to use the most important word when it comes to meeting the climate crisis.”

President Joe Biden said 800,000 people have taken advantage of a special enrollment period for health insurance he created for people who buy coverage of their own.

Biden reopened the marketplaces created by the Affordable Care Act for people who don’t get insurance through an employer or a government program like Medicare or Medicaid.

President Joe Biden called the ongoing vaccination efforts one of the greatest “logistical achievements this country has ever seen,” failing to mention the rapid development of vaccines under the Trump administration.

Biden, who has faced questions about whether he credits former President Donald Trump enough for reaching a pivotal moment in the pandemic, has been careful to attribute the success of the vaccine roll-out as a collective effort on the part of frontline health care workers, his team of health experts, vaccination site volunteers and members of the military.

Health experts say both administrations deserve credit for the vaccine roll-out, but the hard work begins now. With more than half of all American adults vaccinated, the Biden administration enters a new phase of trying to vaccinate harder-to-reach populations and those reluctant to get a shot.

The nation can’t let its guard down now, Biden said, after urging people who hadn’t gotten a shot against COVID-19 to get one.

“Go get vaccinated, America. Go and get the vaccination,” Biden urged. “They’re available.”

President Joe Biden started his speech before a joint session of Congress, saying, “Tonight, I come to talk about crisis and opportunity.”

“While the setting tonight is familiar, this gathering is just a little bit different – a reminder of the extraordinary ties we are in,” he said, referring to the reduced crowd in attendance because of the pandemic.

When he entered office 100 days ago, he said he inherited the worst pandemic in a century, an economic crisis and “the worst attack on our democracy since the Civil War.”

“Now, after just 100 days, I can report to the nation: America is on the move again.”

‘It’s about time’: Biden praises Harris, Pelosi ahead of speech

“Madam Speaker, Madam Vice President,” Biden said at the outset of his speech. “No president has ever said those words from this podium and it’s about time,” Biden declared to applause from lawmakers.

After winding his way through the socially distanced audience, President Joe Biden took his place at the podium.

Biden sat through eight joint addresses as vice president and many more during his 36 years in the Senate.

Tonight, he was the one greeted with applause as House Speaker Nancy Pelosi, D-Calif., said she had the high privilege and distinct honor of presenting the president of the United States.

President Joe Biden entered the House chamber for his address to a joint session of Congress Wednesday. Biden waded his way through the socially distanced crowd.

House Speaker Nancy Pelosi, D-Calif., called the House to order just as Vice President Kamala Harris entered the chamber. Harris and Pelosi made their way through the crowd as lawmakers organized themselves ahead of the president’s speech.

The two lawmakers will sit behind the president during his address to Congress, the first time two women will be seated together at the dais during a presidential address.

Among the issues President Joe Biden will raise during his address to a joint session of Congress is the need to act on gun violence prevention legislation, according to a White House official.

The president is expected to repeat his calls for Congress to pass two House bills that strengthen background checks for gun buyers and reinstate a ban on assault weapons and high capacity magazines – a measure he helped pass as a senator in 1994.

The comments come weeks after Biden declared gun violence an “epidemic and an international embarrassment” as he announced six executive actions that cracked down on the use of so-called ghost guns, or untraceable weapons that can be constructed from parts purchased online.

Though none of what Biden will say is new, gun safety advocates say his decision to discuss gun safety in his first joint address signals to Congress that it has a responsibility to break the political stalemate and that gun violence prevention remains a top priority in the White House.

COVID-19 restrictions are preventing Joe Biden from getting a packed House tonight for his address to a joint session of Congress, but he will get a robust escort into the chamber.

Twenty-four lawmakers – 12 senators and 12 House members evenly split between the two parties –have been designated as members of the president’s escort committee.

House Speaker Nancy Pelosi is not part of the escort because she will be on the dais welcoming the president into the chamber.

Lawmakers gather ahead of Biden’s speech

The vibe in the U.S. Capitol before President Joe Biden’s speech was relaxed and amicable with members fist bumping each other and gathering in small clusters – all wearing masks as required by House rules.

Two veterans – Republican Rep. Tom Cole of Oklahoma and Democratic Rep. Steny Hoyer of Maryland – chatted while sitting next to another before Hoyer had to leave the chamber to join the escort team that will be ushering Biden into the House chamber.

Some members took selfies with each other. Others sat quietly scrolling through their phones as they waited for senators to make their way in. Wyoming Republican Rep. Liz Cheney traded a friendly word with South Carolina Democratic Rep. James Clyburn.

When the president starts speaking, there will only be 200 in attendance, far from the 1,500 that usually attend presidential speeches.

Analysis:Why Joe Biden’s presidency has been so surprising in the first 100 days

Biden to push for tax hike on the wealthy

President Joe Biden is expected to use tonight’s speech during a joint session of Congress to call on lawmakers to do something that many politicians are loathe to do: Raise taxes.

Biden is asking lawmakers to nearly double the capital gains tax for people earning more than $1 million a year and boost the top marginal income tax rate to 39.5% from the current 37%. He’s also proposing to increase the corporate tax rate to 28%, up from the current 21%, to pay for a companion infrastructure and jobs bill.

Biden’s vaccine goals:Biden blazed past his vaccine target for the first 100 days. Does the Trump administration deserve credit too?

Despite not tackling the high cost of prescription drugs in his American Families Plan released Wednesday, President Joe Biden is still expected to emphasize in his speech Wednesday night to a joint session of Congress that reducing drug prices is a top priority.

Biden’s plan also did not propose lowering Medicare’s age eligibility, a proposal he backed during the campaign that is high on the wish list for progressives like Sen. Bernie Sanders, I-Vt. Sanders wants to use the savings from reducing what Medicare spends on drugs to pay for expanding benefits and eligibility.

Oregon Sen. Ron Wyden, the Democratic chairman of the Senate Finance Committee, told reporters Wednesday that Biden left the prescription drug component out of the plan to give Congress “the space to find an agreement.”

President Biden will use his first speech before a joint session of Congress on Wednesday to unveil a $1.8 trillion proposal for national paid family leave, subsidized child care, universal prekindergarten and free community college.

The president’s American Families Plan is the second piece of his “Build Back Better” economic agenda following the release of a $2.3 trillion infrastructure and jobs plan last month.

How to watch Biden’s speech:How to watch President Joe Biden’s first address to a joint session of Congress on Wednesday

To pay for the sweeping expansion in social programs, Biden wants to increase taxes on income earned from selling stocks and other assets by nearly doubling the capital gains tax rate from 20% to 39.6%, for households making more than $1 million, among other increases. His administration also said it would crack down on tax loopholes used by high-income tax-filers. The jobs plan would be paid primarily by raising the corporate tax rate from 21% to 28%.

American Jobs Plan:Joe Biden wants to spend $2 trillion on infrastructure and jobs. These 4 charts show where the money would go.

What Biden will say

President Joe Biden will tell a joint session of Congress on Wednesday “America is on the move again” as it recovers from the COVID-19 pandemic  and will boost his legislative priorities.

Here’s some of what Biden will say, according to excerpts provided in advance of the primetime speech, which begins at 9 p.m. ET:

Biden speech excerpts:‘America is on the move again,’ Biden will say in first speech before Congress

For the first time in history, two women will sit behind a president during an address to a joint session of Congress.

The historic image during Joe Biden’s speech Wednesday is 245 years in the making.

American presidents are flanked by the Speaker of the House and the vice president during such high-profile speeches to Congress, each sitting behind and on either side of the commander in chief.

For the first time, both of those positions are now held by women: Vice President Kamala Harris and House Speaker Nancy Pelosi.

This is not a State of the Union address

Biden’s speech Wednesday evening before a joint session of Congress may seem like a State of the Union address. It is not.

The Constitution says the president “shall from time to time give to the Congress Information of the State of the Union,” but Biden isn’t billing his as such in keeping with tradition.

The (Not) State of the Union:Why Joe Biden’s speech is not officially the annual address

Indiana woman becomes 1st person to be sentenced in Capitol riots, will not serve time