And, speaking after after confirmation in last week’s integrated review that it will be replacing its fleet of ageing PUMA helicopters, Nick Whitney, Managing Director, Leonardo Helicopters (UK), is confident the AW149 is well played to take the UK to another level. The AW149 is an existing military helicopter which has previously been built at one of Leonardo’s Italian sites.

However, if Leonardo UK wins the contract, the aircraft would be tailored to the UK requirement in Yeovil and built in Yeovil, with the likely involvement of its sites in Edinburgh and Luton, which produce defence electronics, as well as its wider UK supply chain.

Leonardo would therefore be able to deliver ‘Military off-the-shelf’ aircraft in less than 24 months, prior to the Puma’s 2025 out of service date.

“In terms of the 149, I think it’s a modern aircraft that’s designed as a multi-role military helicopter.

“It’s being certified and it’s the next generation, helicopters, so we see it as a very good capability to replace the Puma and other aircraft.”

He characterised it as a “medium multi-role helicopter” capable of filling a multitude of needs, as well as of being updated into various other roles as and when required.

The AW149 during a flight (Image: Leonardo UK)

Defence cuts: Insider says there will be ‘difficult choices’ 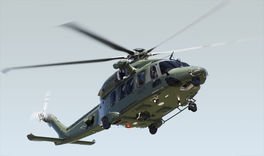 He added: “It’s absolutely up there with modern standards of handling and agility and of course has all the safety systems and ballistic tolerance and crashworthiness that you would expect from a modern aircraft.”

He explained: “The really exciting thing we are seeing from Government is this emphasis on build back better.

The view from the cockpit of the AW149 (Image: Leonardo UK)

“My idea is build back helicopters back better and the opportunity for export of this product is just enormous.”

However, it was crucial Leonardo UK managed to win the UK Government as a customer, Mr Whitney stressed.

He said: “The global sale of 149s will be transformed should the Ministry of Defence buy and operate that aircraft.

“If the Royal Air Force chooses to pick the 149 as their next multi-role helicopter that opens up enormous export opportunities.

Leonardo UK has more than 3,000 direct employees in the UK (Image: Leonardo UK)

“We get fantastic support from the government, in terms of opportunities for export sales and we look for that to continue and we see a very very rosy future for that media multi role helicopter built here in Yeovil sustaining jobs here in Yeovil.

“But it really highlights the importance of securing the sale from the UK Government or the Ministry of Defence, because it just opens the door to those export opportunities.”

The AW149 is a medium multi-role helicopter (Image: Leonardo UK)

“These are high end aircraft operating in extreme environments, delivering huge levels of capability, designed in the UK.

“There aren’t many companies that are capable of doing that.

“We are the only one in the UK, and globally, you’re probably talking about companies that you can count on one hand that do that sort of stuff.

“For me, In simple terms, clever old UK is punching above our weight in the capability we offer, and in the post-Brexit environment is that something we want to do? Surely not. We have got to grow high technology jobs, bring the youngsters on and move on.”

‘It’ll be a war zone!’ Jersey fishermen warn French ships to stay away over fishing spat

The Pursuit of Love BBC cast: Who is in the cast?

'Travelers are ready to explore': LGBTQ travelers leading the way to...